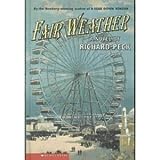 In his celebrated, Newbery-winning novels A Year Down Yonder and A Long Way from Chicago, Richard Peck carried us happily back to the Midwest of the 1930s. Now the master of historical fiction transports us to the1890s, to the Chicago World's Fair and its incredible mix of personalities and new inventions that gave glimpses of the future. Here is a tour de force that combines the real people of the time with an enormously engaging new fictional family, spinning them all into a whirlwind of humor, misadventure, and charms beyond measure.

On the brink of adulthood (not to mention a whole new century), Rosie makes her first trip to the big city, along with her wide-eyed siblings and their rascally old granddad. There, amidst the breathtaking Ferris wheel and other wonders of the fair, Rosie discovers the world and herself, while coming face-to-face with some of the era's most famous peopleincluding showgirl Lillian Russell and Colonel William F. Cody (a.k.a. Buffalo Bill).

Peck's unforgettable characters, cunning dialogue and fast-paced action will keep readers of all ages in stitches as he captures a colorful chapter in American history.”Publishers Weekly

An engaging historical novel that will please a wider audience than the target age group.”Booklist (starred review)

The One and Only Ivan8 reviews
3.