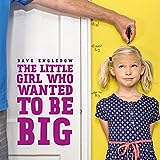 There once was a little girl who wanted to be big. Her dad told her that to be big, she had to think big. So she did—she grew taller than the tallest buildings, larger than the largest mountain, and big enough to reach the farthest plants. But being the biggest person in the universe also makes it hard to go home. What’s the biggest girl in the world to do when she’s grown up a little too fast?

Dave Engledow brings his vibrant photography to a picture book that’s all about why it’s okay to take your time just being a kid.