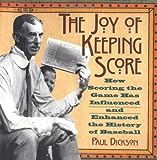 In The Joy of Keeping Score, Paul Dickson celebrates one of the most unusual traditions in all of sports―the baseball scorecard.

To Dickson and to fans everywhere, baseball without a scorecard or box score is unthinkable. And within the history of the scorecard are some of baseball's greatest moments. From the first scorecard introduced in 1845, to the scoring system devised by direct-marketing genius L. L. Bean; from presidential scoring habits to batting titles decided by official scorers to Phil Rizzuto's inspired scoring symbol "WW,* Dickson delights in his subject. Henry Chadwick (the inventor of the scorecard), Ty Cobb, Mel Allen and Red Barber, FDR and Ike, concessionaire Harry M. Stevens, California Angels' official scorer, Ed Munson, and many others all play their parts in this history.

Among this book's many illustrations is a gallery of historic scorecards, some of them from baseball's most memorable contests, including Don Larsen's perfect game in the 1956 World Series, Babe Ruth's "called" home run, and Cal Ripken's record-breaking 2,131st consecutive game. In addition, Dickson provides basic and advanced scoring techniques for fans who record the games they see, a year-by-year timeline of rule changes, a guide to baseball's quirkiest statutes, stories of famous scoring blunders, and many more unexpected rewards.

Harry Potter and the Chamber of Secrets2 reviews
4. 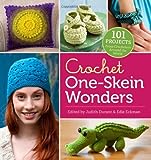 Crochet One-Skein Wonders®: 101 Projects from Crocheters around the World1 reviews