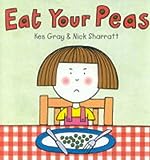 Share to Microsoft Teams
Share by Email
Follow Book
View Comments0
It was dinner time again and Daisy just knew what her mum was going to say, even before she said it. 'Eat your peas,' said Mum. Daisy looked down at the little green balls that were ganging up on her plate. 'I don't like peas,' said Daisy. And so the battle of wills begins. What does Mum have to promise to get Daisy to eat her peas? An extra pudding, a chocolate factory or a space rocket with double retro laser blammers? But whatever Mum offers, it doesn't change the fact that Daisy just can't stomach those gross green peas. So Daisy comes up with an idea which will turn the tables and make someone else suffer.
Hardcover, 32 pages
Published on September 1, 2000 by Bodley Head Children's Books
ISBN-10: 0370326520
ISBN-13: 9780370326528

Keeper of the Lost Cities2 reviews