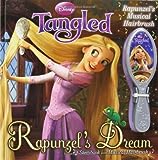 The classic story of the girl with the long golden locks gets an update in Disney’s Tangled. When the kingdom’s most wanted (and most charming,) bandit is forced to make a deal with the golden-haired, tower-bound teen, the unlikely duo sets off on a hilarious, hair-raising escapade complete with a super-cop horse, an over-protective chameleon, and a gruff gang of pub thugs. Expect adventure, heart, humor, and hair—lots of hair—with this swashbuckling tale.

Now girls can read the story of Disney’s Tangled while using the musical hairbrush on their own hair! The brush has a fun musical sound effect that is motion-activated when hair is brushed, making girls feel like they’re part of the magical tale.

Where the Mountain Meets the Moon Gift Set