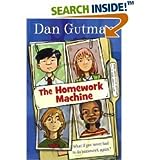 The unlikely foursome made up of a geek, a class clown, a teacher's pet, and a slacker -- Brenton, Sam "Snick,", Judy and Kelsey, respectively, -- are bound together by one very big secret: the homework machine. Because the machine, code named Belch, is doing their homework for them, they start spending a lot of time together, attracting a lot of attention. And attention is exactly what you don't want when you are keeping a secret.

Before long, members of the D Squad, as they are called at school are getting strange Instant Messages from a shady guy named Milner; their teacher, Miss Rasmussen, is calling private meetings with each of them and giving them pop tests that they are failing; and someone has leaked the possibility of a homework machine to the school newspaper. Just when the D Squad thinks things can't get any more out of control, Belch becomes much more powerful than they ever imagined. Soon the kids are in a race against their own creation, and the loser could end up in jail...or worse!
Audio CD