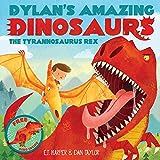 Share to Microsoft Teams
Share by Email
Follow Book
Get Embed Code
View Comments1
Extreme, prehistoric adventures await young readers in this exciting new series. Every kid loves dinosaurs, and Dylan is no exception. But now, thanks to his grandfather’s Dinosaur Journal and a magic toy pterodactyl named Wings, Dylan is able to go where no kid has gone before! When Dylan opens the journal, Wings comes to life, and the two fly off to Roar Island―a magical land where dinosaurs still roam. Cool dinosaur facts, a fun storyline, and bold, action-packed illustrations will make each of these books a fast favorite. A pull-out, pop-up dinosaur adds to the excitement! In The Tyrannosaurus Rex, Dylan wonders: how many teeth did the T-Rex have? Now, Dylan and Wings head to Roar Island to get up close and personal with the King of Dinosaurs to find out! (Ages 4-7)
Paperback, 32 pages
Published on March 1, 2015 by Barron's Educational Series
ISBN-10: 1438006438
ISBN-13: 9781438006437