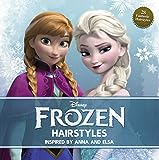 Do you love Princesses Anna and Elsa of Disney's film Frozen?
If you long to recreate these royal sisters' beautiful braids, buns, and other dazzling hairstyles, Disney Frozen Hairstyles: Inspired by Anna and Elsa is for you. The step-by-step instructions in this gorgeously photographed book make it possible for anyone to replicate these heroines' striking looks.
Truly unique, Disney Frozen Hairstyles is the first book to reveal the secrets behind Anna and Elsa's different coiffures. Each of the twenty-eight hairdos is created on a real child and meticulously photographed in full color to make even the most complicated style easy to achieve.
The book depicts a variety of hairstyles perfect for active girls as well as for special occasions such as parties, proms, and weddings. The many beautiful hairstyles include:
Elsa's Icy Braid - a loosely woven, thick braidBig Braid - a beautiful concoction of four interwoven braidsAnna's Braids - two simple but lovely braidsAnna's Crown - a striking alternative to the traditional bunSnow Queen - a special bun accented with a flower
Disney Frozen Hairstyles also features "Braidschool," an invaluable section that shows how to construct the basic braids that are fundamental to Anna and Elsa's looks – as well as so many other hairstyles. Braidschool includes detailed directions and illustrations for creating traditional, French, Dutch, rope, and fishtail braids.
Don't hesitate to jump right in and experiment, to combine styles and create your own Frozen-inspired look. Offering pretty up-dos as well as everyday styles, Disney Frozen Hairstyles makes it fun and easy for anyone to create looks inspired by these beloved sisters.