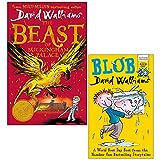 Share to Microsoft Teams
Share by Email
Follow Book
Get Embed Code
View Comments4
Please Note That The Following Individual Books As Per Original ISBN and Cover Image In this Listing shall be Dispatched Collectively:

The Beast of Buckingham Palace [Hardcover]:
It is 2120 and London is in ruins.The young Prince Alfred has never known a life outside Buckingham Palace - but when strange goings-on breach its walls and stalk the corridors in the dead of night, he is thrust into a world of mystery, adventure and monsters.And when his mother, the Queen, is dragged away to the Tower of London, Alfred must screw up his courage and battle to save her, himself... and the entire city.In a future of myths and legends, join the bestselling David Walliams and venture forth into his most enthralling tale yet!

Blob:
This is the story of how a boy called Bob meets a blobfish fish called Blob...And so begins a funny and heartwarming story of a very unusual friendship - and some very strange animals. An astonishingly brilliant World Book Day Book from one of today's favourite children's authors.
Paperback
ISBN-10: 9123926414
ISBN-13: 9789123926411

The One and Only Ivan4 reviews
3.

The One Thing You'd Save4 reviews
4.